HBO's Hemingway and Gellhorn movie review, and The Old Man and the Sea book review

I know many of you read this blog solely for information on beauty, style and vintage culture and photography. However, I did a post at the beginning of the summer about making a list of life enriching experiences and trying to finish all the tasks before the summer was over. One of the things on my list was to read a Hemingway book and write a review, even if I never shared it. I figured why keep it to myself, so here it is. I hope you enjoy, and if it gets you to watch the HBO's Hemingway and Gellhorn, or read Hemingway's The Old Man and the Sea, you won't be disappointed :) 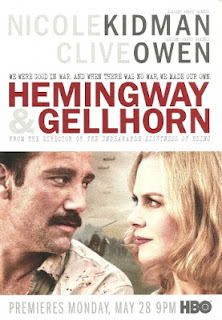 I was so excited to see this movie, as I adore both Nicole Kidman and Clive Owen. It was apparent by the previews they have great chemistry, and I was not disappointed as I watched the film. HBO tends to go all out with these kinds of films, and as usual they knocked this one out of the park. Lavish sets, incredible acting performances, history, music...this film has it all in spades.

This movie is long but moves at a fast pace, covering the meeting of Gellhorn and Hemingway and thrusting the characters right into the turmoil of the Spanish Civil War. I felt like I learned some history from watching this, and that is always a good feeling to me. At the very least it made me curious enough to want to learn more about this period in time.

I don't want to give any spoilers but Hemingway and Gellhorn also spend time in China and Cuba together, both magnificent sceneries, and Germany and WWII also have a place in the film. As someone with a journalism degree I found myself facinated and completely in awe with the character of Gellhorn portrayed by Nicole Kidman. As someone who is a writer and dreams of one day finally publishing a book, I was inspired by Hemingway and Clive Owens performance of him. To think the man stood as he typed up his books on a typewriter. When he wrote something he didn't like he would let the pages glide to the floor.

"Never crumble them up," he tells Gellhorn of written pages, "a writer who crumbles the pages will go crazy within a year."

The film dipicts Martha Gellhorn as everything a journalist should be. She's brave, compassionate, and not afraid to speak her mind even as she slings zingers at the Empress of China. I think Gellhorn really is the hero of the film, and I want to read more about her and her writing after watching this. Of course Nicole Kidman looks fantastic in every part of the film, with shoulder length golden blonde hair, an amazing glowing complection, and classic retro red lips. Her wardrobe is mainly pants and shirts, with a few dresses in some of the scenes. She has never looked better than she does in this film, in my opinion. If they make a film about my life some day, I hope a beautiful actress like Nicole Kidman plays me! Except she would need to be a brunette, haha.

Hemingway is not so likable in the film. I do think Clive Owen portrayed him brilliantly, but let's face it, Hemingway had many not-so-endearing qualities and the film touched on them all. Alcoholism, chauvanism, leaving his family, being prideful and unfaithful...they went there with all that stuff. 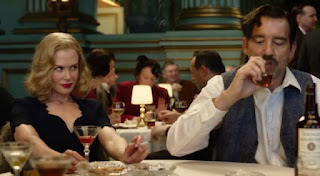 However, I never really had the desire to read any Hemingway until I saw this, and I was really missing out. No matter who he was in his personal life, he was an amazing writer. The first book I read by Hemingway, The Old Man and the Sea, is now one of my favorite stories. Loving Hemingway's writing is just another lesson to me in how you can't always judge someone's talent from their character and their personal life. Whoever Hemingway was in his personal life, he was an extroidinary writer who could make even the smallest character and person have a lasting impression on your life. 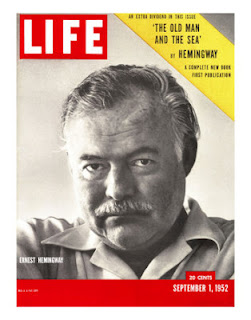 Hemingway's The Old Man and the Sea: 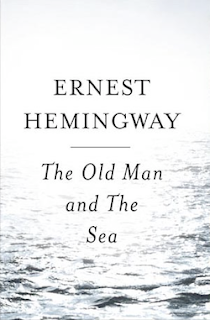 This book is based on a tale told to Hemingway when he was in Cuba. It is a tale of an old fisherman who caught a big fish, was taken out to sea by it, and before he could make it to shore the fish was eaten by sharks.

The Old Man and the Sea is a brilliant piece of writing that hits really close to home. It makes you address the parts of yourself that make you spoiled and a quitter.

The old man in the story, Santiago, is very poor and has worked his entire life as a fisherman. His only joy is a neighborhood boy who fishes with him, although the boy is now fishing with someone else because the old man is "unlucky" in his efforts. The boy is fiercly loyal, but his parents don't share the sentiment.

And so Santiago goes out once again alone, hopefully to catch a fish so he can eat. From then he hooks the big fish and begins his journey being pulled out to sea by it.

Every aspect of his strength is challenged, mentally and physically. He forms a bond with the fish, and he is filled with so much respect for the beast.

It is amazing the way Hemingway captures the essence of a different culture and their way of thinking without alienating the reader.

The old man has a lot of time to think as he travels the ocean being dragged by the massive fish, and he reflects on many different times in his life, and who he was then and now. 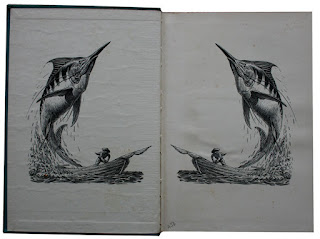 As you read this you can't help but reflect on your own life. Who are you as a person? Are you a quitter? What do you stand for? I asked myself these and many other questions. Many times my eyes would fill with tears and I would just nod in agreement with Santiago as he evaluated himself. I laughed when he laughed, and when he was sad and tired I thought of times I was sad and tired. What a connection you have with this character...and to think we couldn't be more different. I think most people who read this are a world apart from this old man, so why does his plight affect us so?

Reading this book was a forceful reminder of what the power of reading can do. It can change you. When you watch a film someone else has already interpreted the information for you. But when you read a book you interpret it yourself. It is a gift to be literate, and it's a gift we all tend to take for granted or not use...just some food for thought.

Do you all have any books that make you think deeply about who you are and what you stand for?

Do you question yourself on a regular basis?

In a movie about your life, who would play you?